Warning: Use of undefined constant HEADER_IMAGE_HEIGHT - assumed 'HEADER_IMAGE_HEIGHT' (this will throw an Error in a future version of PHP) in /home/drfmy3hzd5yi/domains/foodtrients.automationdev.com/html/wp-content/themes/FT/functions.php on line 122
 Annatto Seeds Pack a Powerful Punch | Food Trients 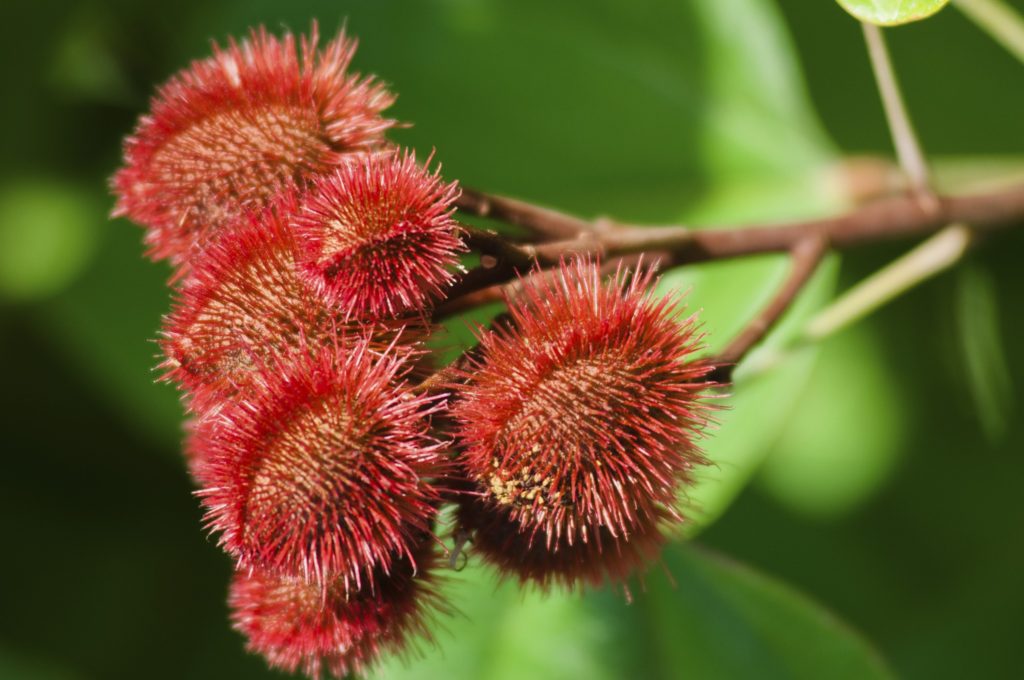 Many people have never heard of annatto, also called achiote. The closest most of us in North America have come to this tiny seed that grows in Central America, South America, and the Caribbean is cheddar cheese. Annatto is used to color the naturally white cheddar a pleasant shade of orange. Stunning new research shows that this often overlooked spice from the rainforest is very good for us. For centuries, folk healers have used annatto to treat infections topically and orally. Some cultures consider it a digestive aid and a heartburn calmer.

Annatto/achiote is full of the FoodTrients vitamin C, vitamin E, and carotenoids, as well as vitamins B2 and B3 and helpful phytochemicals. Other compounds in annatto are antimicrobial. According to new studies that have looked into the molecular structure of vitamin E, the form of vitamin E available in annatto (tocotrienol) is a strong anti-inflammatory and antioxidant and can lower cholesterol. Vitamin E is integral to skin, hair, and nail health. A company called American River Nutrition (www.americanrivernutrition.com) extracts this superlative form of vitamin E from annatto seeds and sells it as a nutraceutical. Instead of taking an annatto/achiote supplement, you can just cook with it.

Achiote seeds grow inside inedible, spiky, heart-shaped, fruit pods. You can buy powdered annatto or achiote seeds at Mellissas.com. I prefer working with achiote seeds because I know they haven’t been adulterated with other powders or flavors. The best way for home cooks to extract the flavors and nutrients from the seeds is to simmer them in oil or infuse them in vinegar. The goodness and flavor of the achiote will then be transferred to the oil or vinegar.

I use neutral-tasting oil like corn or canola or grapeseed, which won’t fight the taste of the seeds (see recipe below). Olive oil isn’t a good choice. Coconut oil can work really well especially if you’re planning on making a Brazilian dish.

To infuse vinegar, place a teaspoon of seeds in a 2-cup container and cover with ¼ cup of white vinegar. You can also use rice vinegar or apple-cider vinegar. Microwave the mixture for 1 minute, then let stand for 20 minutes. Strain the solids out and use the infused vinegar to add flavor when slowly roasting pulled pork with onions. To make a salad dressing with it, combine the vinegar with 1 teaspoon of honey and 2 tablespoons of canola oil. Add salt and pepper to taste.

You may also want to try adding annatto’s beautiful orange seeds to hummus. Chickpeas (garbanzo beans) contain fiber, which can lower cholesterol and keep appetite at bay. They’re also a good source of folate, which helps protect against heart disease. Annatto is an excellent source of tocotrienols, a particularly potent form of vitamin E that helps lower cholesterol and protects the skin from the aging effects of the sun.

I’ve amped up the nutrient content of this hummus recipe by infusing oil with annatto. Serve the hummus with cut vegetables or spread it on pita wedges or flatbread.

1. Drain and rinse the garbanzo beans.

2. Pour the beans, water, 1 Tbs. of the Annatto Oil, spices, and tahini into a food processor.

3. Blend for about 10 seconds or until very smooth.

4. Scoop the hummus into a shallow bowl and drizzle with the remaining Annatto Oil.

1. Heat the seeds and oil in a pan over low heat for about 5–7 minutes or until the oil turns a bright reddish-orange color. The seeds will sizzle and turn dark, but do not let them turn black and burn.

2. Strain to remove the seeds.

Chef’s Note: You can store Annatto Oil in the refrigerator for up to a month.

Grace O has been cooking and baking professionally and recreationally all of her adult life. As a child in Southeast Asia, she learned the culinary arts by her mother’s side in her family’s cooking school. She became so well versed in hospitality and the culinary arts, she eventually took over the cooking school and opened three restaurants. She is widely credited with popularizing shrimp on sugar-cane skewers and being one of the first culinarians to make tapas a global trend. She has cooked for ruling families and royalty. Grace O’s move to America precipitated a career in healthcare, inspired by her father, who was a physician. Twenty years and much hard work later, she operates skilled nursing facilities in California. Grace O strives to create flavorful food using the finest ingredients that ultimately lead to good health. Her recipes, although low in saturated fat, salt, and sugar, are high in flavor. Grace employs spices from all over the world to enliven her dishes, creating food that is different and delicious. She believes that food can be just as effective at fighting aging as the most expensive skin creams. And since she’s over 50 herself, she’s living proof of that. foodtrients.com
What Do FoodTrients Do?

Support the body’s resistance to infection and strengthen immune vigilance and response.